Are you looking for an excellent place to eat pho in Hanoi? Check out the 8 best pho in Hanoi to ensure you don't miss out on the best bowl of Pho.

Because Pho originated in Hanoi, there is no better place to eat it than there. You can find pho anywhere in Hanoi, but pho in Hanoi Old Quarter is the most famous. Wafting through the air is the sweet aroma of star anise and cinnamon soaking in broth from simmering beef bones, leading you around the corner and down a narrow alley. The smell is on nearly every street. Continue on reading if you want to know 8 locations in the Old Quarter to find the best pho in Hanoi.

When you ask Hanoians which pho restaurant they prefer, Pho 10 Ly Quoc Su is unavoidably mentioned. Because of its fame and the quality of its pho, this restaurant now has three locations in Hanoi. The best one is still the original location down Ly Quoc Su Street near Hoan Kiem Lake and St. Joseph’s Cathedral.

As usual, the pho bowls here are prepared to perfection. The broth is subtle, with no one flavor overpowering the others; the noodle perfects and the meat is tender. There are six different pho available here, all with beef and prepared differently depending on your preferences. Want to eat Pho like a Hanoian? Don't forget to get some "quẩy" (dough sticks) to dip into the soup and eat with your noodles.

Besides the excellent pho, the service is prompt. You can observe the pho chefs as they prepare the dishes with speed and precision behind glass doors. Pho 10 Ly Quoc Su is the most well-known restaurant in Hanoi, so it's no surprise that it's leading to this top list.

When you see a classic Vietnamese restaurant with locals queuing outside while the inside is packed, you know you're getting good pho. Pho Bat Dan is a restaurant like that.

Since Pho Bat Dan restaurant is self-serve, you must wait in line, then find a table for yourself. Be patient, and you'll be rewarded with one of Hanoi's most authentic bowls of beef pho.

Pho Bat Dan - one of the oldest Pho restaurants in Hanoi. Photo by Mia

This pho joint has been there since the 1960s, preserving the same, consistent recipe that has remained unchanged since. That’s why Hanoians enjoy the taste of pho bowl here because of its traditional flavors. The broth is clear and rich, with a subtle blend of many flavors. Plus, the beef is tender and soft, with a glowing pink hue.

Especially, unlike other Hanoi Pho restaurants, they do not serve lime with their soup. They assume that because the broth is so delicious; you don't need to add it, and they are unquestionably correct.

If you stay in a hotel on Hang Giay Street in the Old Quarter, you can come here in the morning to enjoy the unique pho. Besides beef noodles, the restaurant also serves a variety of Pho, including beef noodles with thinly sliced steak and beef noodles with fried steak with garlic.… The broth is so delicious and slightly thicker than at other Pho restaurants.

Pho Vui had been operating for over 30 years. Photo by Thanhnien

The restaurant's name translates to "happy". So it may remind everyone of the satisfaction that comes with enjoying a bowl of Pho here, delicious and also happy at the end of the meal!

Pho Suong, like all famous pho restaurants in Hanoi, has been around for a long time and has a loyal customer base. “Suong” in Vietnamese means “satisfying”. According to the owner, the restaurant was named to trigger people’s interest. It also refers to the satisfying feeling that they want their customers to feel after eating their noodles.

Pho Suong restaurant located in Trung Yen alley is a familiar destination for many diners who love Hanoi pho. Photo by Dantri

Pho Suong is known for its unmistakably Northern flavor. The pho here is amazing, perfecting clear broth, the noodles, the herbs, vegetables, and the pieces of tender beef.  Besides, Pho Suong has the nicest interior of all the pho restaurants in this article.

While traditional pho is cooked with beef, you may order a chicken-based version here. This restaurant serves the greatest pho ga (chicken pho). Pho Ga Lam has been operational for over forty years. It’s run by an older woman named Lâm.

A bowl of chicken noodles at Pho Ga Lam. Photo by @labeo.foods

Pho Lam is famous for the quality of chicken meat. Vietnamese hen meat, golden skin, soft and fragrant with a few stalks of lemon leaves... A bowl of chicken noodle soup from Pho Lam is full. The noodle is big and soft. The broth is sweet, moist, tender chicken with no bones, and crispy “quẩy”, a special red chili vinegar.

Although famous, the price is also quite affordable: 40,000 VND / special bowl, the personal option costs more. Pho Lam used to be sold in the morning, but now it's open all day. Many diners revealed that if you want to eat delicious pho, come when Mrs. Lam sells it. Perhaps the true "Hanoi quality" is also appraised by the diners through the human symbol of the pho restaurant.

Even though it only opens after the sun goes down, this location is popular among many young and trendy Hanoi youth, although you have to sit on the sidewalk on small child-sized plastic stools. You can choose between the traditional soup-type pho, or pho ga (chicken noodle), or the dry version of the pho, which is just as delicious, if not more so. Enjoy dinner here at least once before go explore the rest of Hanoi's nightlife.

Pho ga in Pho Hanh is fatter and the amount of meat in each bowl is big. Besides the popular Dry Chicken Pho, Pho Hanh also has a signature dish which is the top favorite of locals – Chicken salad with chicken feet. If you don't want to try it, the chicken salad is an option (vegetable & chicken meat). It still tastes amazing with sweet and sour Vietnamese traditional salad sauce, crunchy fresh vegetables, and soft juicy chicken meat.

This friendly, quiet restaurant is on a corner in the Old Quarter. According to the shop's owner, her grandfather founded it in 1978. She revealed that if you made the beef noodle soup correctly, it shouldn't need any lime.

Instead, only three items are on the table: garlic vinegar (which smelled especially good here), fish sauce, and fresh hot saucisson. Their soup had a well-balanced broth that wasn't too salty.

The noodles are delicate, and the beef is thinly sliced, making it ideal for chowing down when you're starving. Because it does not need chewing and simply melts in your mouth.

This last eatery is clean and comes with hospitable service. It's a traditional pho restaurant that was once owned by an older man named Tu Lun, who was well known for his tasty soup preparation. He has since passed away, but his two sons have continued the family tradition.

Currently, Pho Tu Lun had been operating for 95 years. The broth here is heavier in the fish sauce for those who prefer a saltier broth.

The broth at Pho Tu Lun is heavier than other Pho restaurants in Ha Noi. Photo by dienmaynewsun

It has both green onions and fresh cilantro in it. Their orange chili sauce is a delectable homemade concoction as well. This restaurant is a great place to satisfy your pho cravings!

Pho is so popular in Hanoi that you can almost always find it. There are even 3-4 restaurants on some streets, ranging from luxurious to simple ones hidden inside alleys, but only restaurants in Hanoi Old Quarter can meet the strict requirements of Hanoian gourmets. So above suggestion, you should visit if you desire the best Pho in Hanoi. 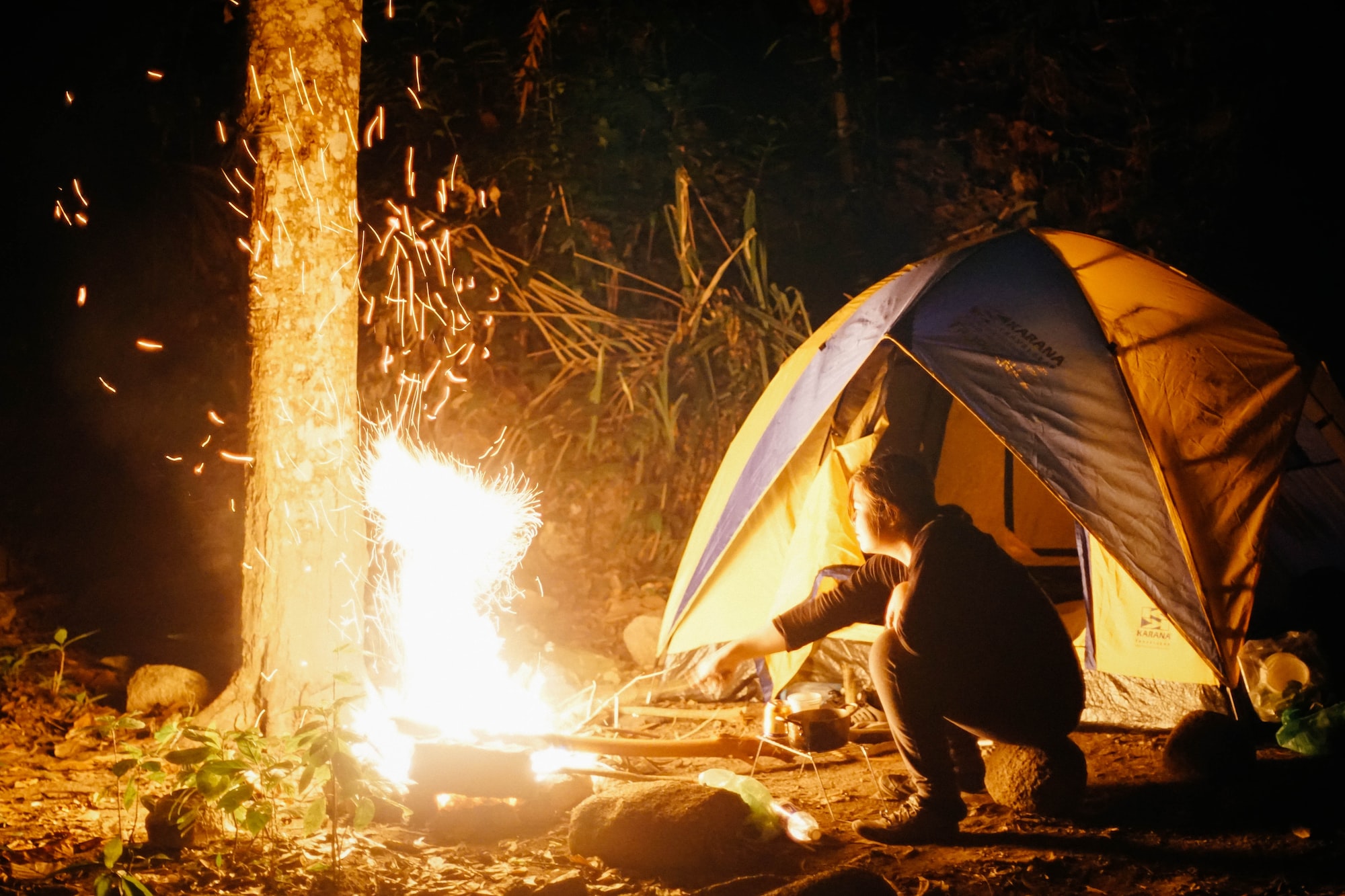 Having a chance to travel to Vietnam and enjoy camping in Vietnam is so amazing! The country owns so many wild and majestic places to satisfy any travelers. Once you travel to this city, the best thing you could experience is to take the best view of the river and feel her in your heartbeat. If you enjoy coffee time and want to bring your children along, here are some kid-friendly coffee shops in Saigon you don't want to miss.